Playing Risk online offers a lot of unique and interesting new opportunities. New friends, new rules, new challenges, and new variant maps. While there are a lot of different battlefields to choose from, some really standout when compared to the rest. Either for originality or sheer barrenness.

The following six variant maps are so unique and off-the-wall that they’re worth at least one play-through. Each one really shakes the game up and pits players against each other in a very non-traditional setting. Whether it’s warring for control of a classic video game or fighting it it out on Mars, each of these variant maps gives fans a whole new way to play Risk. 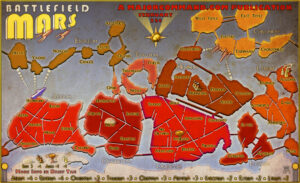 Battles set on the Red Planet have been around since the dawn of science fiction. In the early 1900’s authors would often stage fantastical fights on Mars. Conquering other planets has been a major fantasy for well over a century. And Major Command’s Mars map brings the battle to life.

With 55 different territories to control and several special game rules, the Mars map can be a real challenge for even the most experienced of players. Anyone who wants a tough battle in a very alien land needs to give this Risk online game a shot. It’s an exotic warzone that packs a lot of excitement. 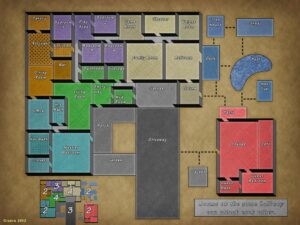 Sometimes it’s nice to take a break from all the fantasy warfare, outer space combat, and global conquest. Instead of batting for control of the world or outer space, it’s more fun to scale down. To fight over something much smaller and more relocatable. Like a house for instance.

The map House does just that. It shrinks the action down and pits players against each other for control of an ordinary home. Units fight to take command of the kitchen, driveway, and guest bedroom. It’s a fun concept and one that makes the game of Risk seem a little more relatable. 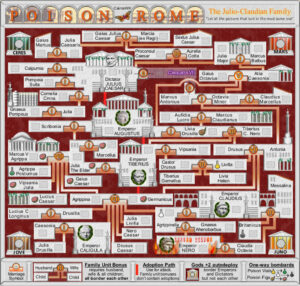 Who controls the rulers who set off on epic conquests? There’s more to world domination than raising an army and marching them off to battle. And this is a theme that Poison Rome really allows players to explore. This map isn’t about fighting for Asia or North America, it’s about controlling the bloodlines of some of Ancient Rome’s most powerful families.

Poison Rome really pushes the envelop in terms of what playing a Risk free online variant can do. Gamers who want a very cerebral experience will be delighted by what this political thriller has to offer. Controlling families and vying for power is a refreshing and entirely original spin on this classic game. 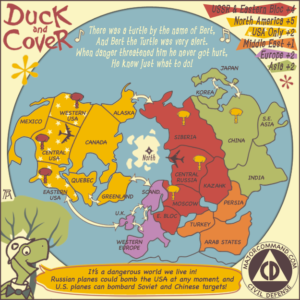 This map is a loving throwback to 1950’s Cold War America. Everything about it, right down to the art style, captures the period perfectly. While a map of regular old Earth may not sound that interesting, Duck and Cover adds some clever game mechanics that turn the battlefield into a frantic fight for survival.

What sets this map apart is its use of nuclear weapons. This is Risk on steroids where players are given the power to wipe entire territories off the map. This may sound a little too gimmicky and chaotic, but thanks to well written rules it actually plays very well. Anyone who has every played Risk and wished there was a nuclear war option will be delighted with this map. 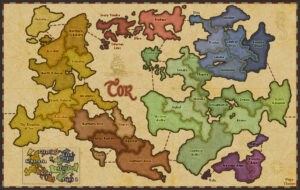 Fantasy combat and Risk go almost hand-in-hand. The epic conquests kings and wizards fit Risk’s themes rather well. And the Tor Map gives players a sprawling mythical land to invade and control. With seven main regions and dozens of points of entry, this map really tests players tactical capabilities. Opponents have to pay attention to how they protect themselves, least an enemy quickly overpower them.

Players who enjoy fantasy worlds and want to experience a very difficult map, will enjoy the world of Tor. It’s big, strategic, and tough to conquer. Perfect for budding commanders seeking something a little more hardcore.

Board games and video games usually don’t have a whole lot in common. Yet this unlikely pairing between Risk and Pac Man is surprisingly enjoyable. Everything about this map, from the game mechanics to artwork, gives off a very retro video game feel. There are even power-ups and ghosts to add to flesh out the theme.

With over 150 different territories to conquer and unique rules specific to the map, Conquer Man is sure to keep players busy for some time. The bonuses, clever power-ups, and massive battle field add a lot of unique spins tweaks to the classic game play of Risk.

And That’s Just The Tip Of The Iceberg…

Risk online games offer hundreds of different battlefield options. Players can choose from all kinds of different variant maps, some tradition and others a little more far out. Commanders can battle for control of everything ranging from a baseball diamond to Great Britain to the entire solar system. And everything in between.

Anyone looking for more variant maps and interesting Risk variations needs to check out what’s in store for them online. Many sites offer new rules and settings that shake the game up and add a new layer of fun.