RISK: Balance of Power was released in 2008 as the first official RISK game designed exclusively for 2 players by Hasbro Parker Brothers and the designer Rob Daviau. 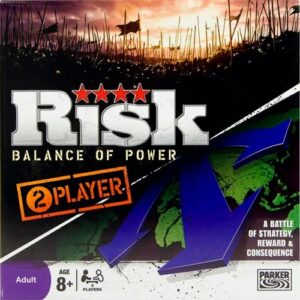 Whether you enjoy playing the classic RISK board game with friends, or whether you enjoying the various options of playing RISK online, you would have noticed that RISK is a game designed to be played by more than 2 players. Even though it’s possible to play it 1-on-1, it’s not exactly the optimal RISK game experience. Whenever classic RISK is played with just 2 players, it’s never usually that fun since one player would almost always have the balance of power and build up a massive advantage. In that case, there’s almost never a back-and-forth game because it’s too easy to run away with momentum when you get a lead.

The most logical step to solving this conundrum is to design a RISK game that’s specifically for 2 players. While that’s indeed possible, the challenge is to make it still feel like RISK while changing various things to make it more conducive for 1-on-1 heads-up play. That’s exactly what designer Rob Daviau did with RISK: Balance of Power, and it seems like he did a good job.

RISK: Balance of Power was released in 2008 as the first official RISK game designed exclusively for 2 players. The four-fold board features a map of northern and central Europe, excluding the Iberian Peninsula and the Balkans. There’s a total of 30 territories divided into 6 regions, with 11 of them containing rough terrain. It’s smaller than the usual world map in classic RISK so it doesn’t take too long for 2 players to finish a game.

RISK: Balance of Power takes upon a modern military theme and is split into two games—Basic Training and Command Room. The army pieces are molded arrowheads that make the board look like a diagram than the usual soldiers marching around the world like in classic RISK game, something that may seem less desirable for longtime RISK fans, but it does give the game a different look that may be refreshing for some. 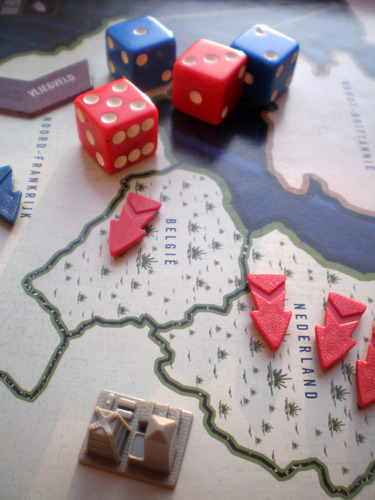 The objective of this RISK game is to either defeat the opposing player directly or take three objectives. Eight objectives are drawn at random from the twelve available and spread out during the start of the game. A player can take up to one objective per turn by completing requirements (to prevent single turn victories).

RISK: Balance of Power has an objective-based victory condition making it similar to another Rob Daviau-designed game, RISK: Black Ops. There’s also the inclusion of a strong neutral faction that makes the game more conducive to 1-on-1 play. This neutral faction simply defends, with the opposing player controlling it by proxy when attacked. Those who have played RISK: Balance of Power tend to say that the neutrals are indeed tough, adding to the challenge.

While it was designed to still have that classic RISK look and feel, RISK: Balance of Power does have many fundamental differences from the classic RISK game in addition to Objectives. Some of them are the following: 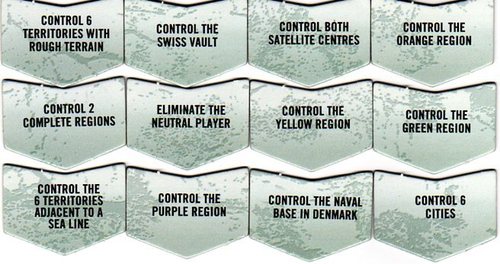 There’s also the aforementioned gameplay modes—Basic Training and Command Room. The former lays down the foundation of the system to ease beginners in while the latter adds more complexity to the game. Command Room has three major additions to the Basic rules:

A game of RISK: Balance of Power can range from 20 to 90 minutes in length, depending on which version of the game you play, how things get set up, and the objectives that get drawn. 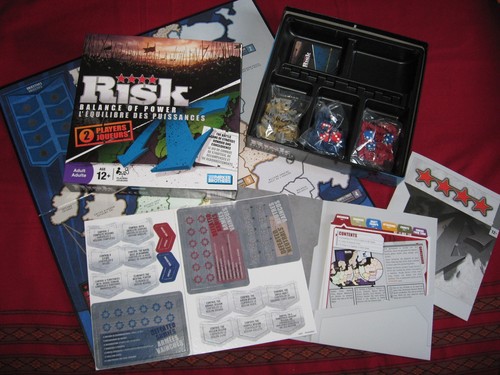 The inclusion of randomness in objectives and a neutral faction makes for more dynamic gameplay that gives both players more things to worry about other than just each other. That solves the usual problem of lopsided momentum that tends to occur with a heads-up play in classic RISK game, and it also adds more features to gameplay that makes it more exciting.

As for the material, the board, and the arrow pieces may not be visually desirable for a lot of people. If you’re able to get past appearances, you may find RISK: Balance of Power to be quite fun and an interesting take on the RISK games as a whole.