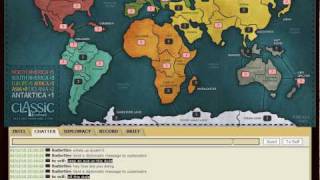 Major Command Risk - Video Major Command Game Screen options and Features What's up, guys? Badorties here and I'm just going to quickly run down the in-game features that you'll see at Major Command while you're playing a game. To start it off, I'm playing a game with Codanostra on the Classic Evolv

What’s up, guys? Badorties here and I’m just going to quickly run down the in-game features that you’ll see at Major Command while you’re playing a game. To start it off, I’m playing a game with Codanostra on the Classic Evolved map which is sort of our basic map. The “Begin Turn” button will obviously begin your turn, it also ends turn and ends deployment rounds as well. This taskbar basically says what’s going on. It’s pretty simple. These round buttons will go forward and backward in the rounds so you can see what the round was in the previous date to see how the game has flowed, etc.

The “Names” button is pretty obvious. It turns the names on and off if you want to reference something in the game chat, et cetera.

The “HUD” is just some extra in-detailed information about what you should be doing. It’s great for noobs if you’re learning how to play, et cetera. It will tell you just some instructions, but I usually turn it off.

The “Colors” is a really cool thing. I can change my color to whatever I like. We have all different tons of colors. Let’s say, “I’ll be black.” But I can also change my opponent’s colors as well. I’m playing Codanostra so let’s go to make him pink. There he is, he’s like pink, but this is only visible on my screen. If he’s only pink on my screen, on his screen, he is whatever color he has chosen himself to be. In the game chat, I can’t call him “pink” because that’s not what he sees or what other people see.

Then the tabs are something that you really want to check regularly if you hope to win the games.

The “Intel” tab is important. It shows all the information about how many troops people have, how many regions, to get a good overview of how the game is going. The red numbers are the highest in each category so right now, Codanostra is a little bit more than me.

The “Chatter” is just some game chat. Like, “What’s up, dude?” et cetera. If I wanted to send something to myself, I can do that as well like, “Keep an eye on Africa.” That’s just to me. This is really not that useful in one versus one game but in team games, you can send information to your teammate which is really important.

“Diplomacy” is a great feature. So let’s say I want to send some diplomatic communication to Codanostra, like, “Let’s work together to take Africa.” So I’m teaming up with him but it’s not exactly a secret because I will send this information to him and in the game chat it says that I’ve sent a diplomatic message to Codanostra, but it doesn’t say what it actually is. If you see people, it may look like they’re conspiring but who knows what they’re actually doing? I can actually conspire with him if I want to create a sort of truce over certain borders like Amazonas and Bolivia. I can do that and I’ll set it for 10 rounds which are really long. That request is sent to him. He can confirm or deny it. If he confirms it, then we have a truce over these borders. It doesn’t mean that we can’t attack each other, it’s just that it affects our diplomacy rating if we do.

The “Record” tab will show what’s been going on, what happened, what each player did, et cetera. If you want to see what happened during a round, you should certainly check that.

And then finally, the “Brief” tab just shows you the basic game information right here, what type of game it is and just some extra visual information on the legend or et cetera. 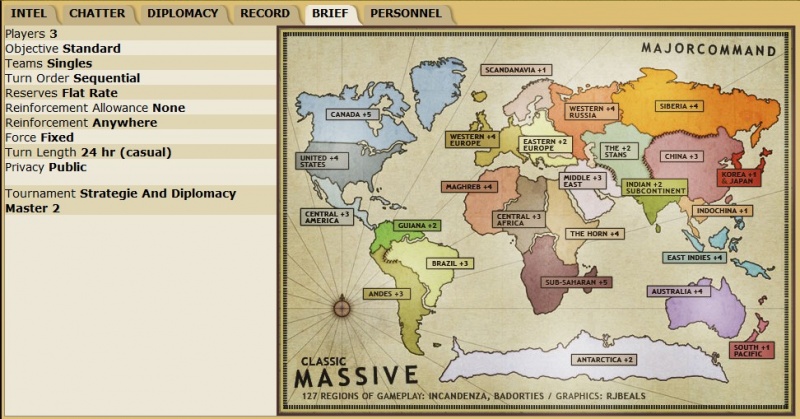