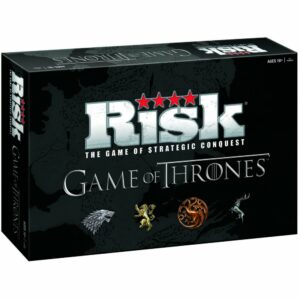 Game of Thrones, which is now one of the most successful television shows ever, was spawned from George R.R. Martin’s landmark series of epic fantasy books entitled A Song of Ice and Fire. Since the beginning of the series, Game of Thrones on HBO has captivated audiences with it’s countless fascinating characters who are embroiled in intrigue and conquest, as well as its now-infamous unpredictability.

The different Houses, each with its own emblem, motto, and way of doing things are a point of fascination for hardcore fans, which does lend itself to strategic gameplay. With the show’s seventh season on its way as of this writing, perhaps it’s indeed time to take a look at it in strategy board game form with RISK: Game of Thrones.

With the series’ cerebral and unpredictable nature, it indeed seems like a natural fit for the RISK strategic board game. If you are interested in this Game of Thrones version of RISK, then please read on and see if it’s the right game for you. 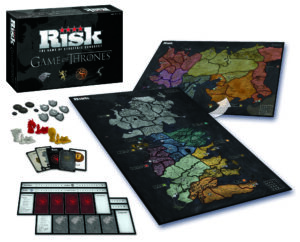 This game is a modified version of Classic RISK, released in August 2015 to coincide with the popularity of the critically-acclaimed HBO series. It is available for $74.99 and is best played by 3-7 players, although it does have a mode for heads-up action between two players.

RISK: Game of Thrones features the different Houses depicted in both the books and the show. Six of them are familiar to fans—Stark, Martell, Baratheon, Lannister, Tyrell, and Targaryen. The seventh one is the Ghiscari, which is the collective of various city states in Essos which Daenarys contends with in the story.

The box itself contains over 650 intricately carved and beautifully colored pieces, with 45 uniquely designed pieces for each House and various neutral army pieces. It also comes with a player board for each House to help track progress during the game, as well as character cards that can influence how battles are won and how territories are conquered.

The first mode is the War of Five Kings, wherein 3-5 players can choose between the Houses Stark, Martell, Baratheon, Lannister, and Tyrell to battle for the Iron Throne in Westeros. Meanwhile, the second mode takes place on Essos for one-on-one play. Players choose between Hourse Targaryen and the Ghiscari. Both players vie for control over slaves held by the Ghiscari.

The third mode is World at War, an all-out no-holds-barred battle royale between all seven factions for control of everything. In this third mode, you can choose between Skirmish and Dominion, whichever players want to tackle. If you’re looking for just a bloodbath between the Houses, you can go for Skirmish. If you want deeper strategic gameplay, then Dominion is more suitable.

Skirmish rules plays much like Classic RISK, with some variation to make it suitable for the new map. As with most RISK games, the player who controls the most territories, castles, and ports when the end game “Valar Morghulis” card is revealed wins the whole game. Basically, it’s mostly just invading territories and rolling dice, hopefully beating enemy forces along the way with minimal losses.

Dominion is more like the newer RISK rulesets with Objectives, Character, and Maester cards for more strategic depth. Instead of just taking control of territories, castles, and ports and holding on to them, Dominion is more about achieving Objectives to gain Victory Points. The first player to get 10 total Victory Points and gain control of the Seat of Power wins the whole game.

Objectives can range from 1 to 4 Victory Points each. The Character cards provide the player with special abilities to the chosen House while Maester cards can grant tactical advantages during deployment and battle. 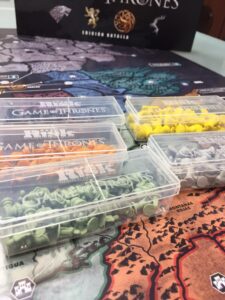 Since its release, RISK: Game of Thrones has garnered mostly positive reviews. While the Game of Thrones theme and the new gameplay modes mix things up, it’s still RISK in its very core. Having 6 to 7 players playing at once can get fairly chaotic, which is a big part of the fun in the first place.

Skirmish is best for serious RISK players who have no qualms with sitting there for hours at a time trying to make the best moves and dreading what the dice may bring. For those who want a whole lot more entertainment, Domination is good as it has the potential for fireworks and shenanigans.

Perhaps the biggest strength of this RISK game is the variety, not only with the game modes made available here, but with the game pieces and artwork as well. People who expected this just be RISK with Game of Thrones window dressing on it have been pleasantly surprised with how unusual it is in a good way.

Then again, that’s mostly courtesy of the objective-based gameplay of Domination, which was introduced to RISK in recent years. Providing alternate victory conditions as opposed to just conquering as many territories as possible helps break the monotony of what had long been a flat-out attrition-based strategy game. 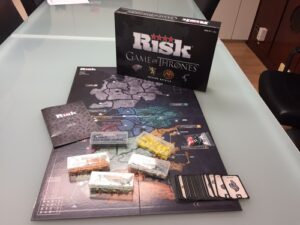 RISK: Game of Thrones is designed to accommodate both veteran RISK players and beginners who are getting into it because of the show or the books. Take note that while the boards and game pieces are well-designed, but there are some details on the manual and the cards that may irk some people.

This RISK game is best for those who want a middle-of-the-road RISK experience that combines both classic and modern variants of the game, along with the additions and changes brought on by the Game of Thrones theme.